Statement from Professor Phil Jones, Head of the Climatic Research Unit, University of East Anglia.
In the frenzy of the past few days, the most vital issue is being overshadowed: we face enormous challenges ahead if we are to continue to live on this planet.

One has to wonder if it is a coincidence that this email correspondence has been stolen and published at this time. This may be a concerted attempt to put a question mark over the science of climate change in the run-up to the Copenhagen talks.

That the world is warming is based on a range of sources: not only temperature records but other indicators such as sea level rise, glacier retreat and less Arctic sea ice.

Our global temperature series tallies with those of other, completely independent, groups of scientists working for NASA and the National Climate Data Center in the United States, among others. Even if you were to ignore our findings, theirs show the same results. The facts speak for themselves; there is no need for anyone to manipulate them.

We have responded to these Freedom of Information requests appropriately and with the knowledge and guidance of the Information Commissioner.We have stated that we hope to gain permission from each of these services to publish their data in the future and we are in the process of doing so.

My colleagues and I accept that some of the published emails do not read well. I regret any upset or confusion caused as a result. Some were clearly written in the heat of the moment, others use colloquialisms frequently used between close colleagues.

We are, and have always been, scrupulous in ensuring that our science publications are robust and honest.

CRU statement
Recently thousands of files and emails illegally obtained from a research server at the University of East Anglia (UEA) have been posted on various sites on the web. The emails relate to messages received or sent by the Climatic Research Unit (CRU) over the period 1996-2009.

A selection of these emails have been taken out of context and misinterpreted as evidence that CRU has manipulated climate data to present an unrealistic picture of global warming.

This conclusion is entirely unfounded and the evidence from CRU research is entirely consistent with independent evidence assembled by various research groups around the world.

There is excellent agreement on the course of temperature change since 1881 between the data set that we contribute to (HadCRUT3) and two other, independent analyses of worldwide temperature measurements. There are no statistically significant differences between the warming trends in the three series since the start of the 20th century. The three independent global temperature data series have been assembled by:

• CRU and the Met Office Hadley Centre (HadCRUT3) in the UK.

• The Goddard Institute of Space Studies (GISS), part of the National Aeronautic and Space Administration (NASA) in New York.

The Intergovernmental Panel on Climate Change (IPCC) in its 4th Assessment Report (AR4) published in 2007 concluded that the warming of the climate system was unequivocal. This conclusion was based not only on the observational temperature record, although this is the key piece of evidence, but on multiple strands of evidence. These factors include: long-term retreat of glaciers in most alpine regions of the world; reductions in the area of the Northern Hemisphere (NH) snow cover during the spring season; reductions in the length of the freeze season in many NH rivers and lakes; reduction in Arctic sea-ice extent in all seasons, but especially in the summer; increases in global average sea level since the 19th century; increases in the heat content of the ocean and warming of temperatures in the lower part of the atmosphere since the late 1950s.

CRU has also been involved in reconstructions of temperature (primarily for the Northern Hemisphere) from proxy data (non-instrumental sources such as tree rings, ice cores, corals and documentary records). Similar temperature reconstructions have been developed by numerous other groups around the world. The level of uncertainty in this indirect evidence for temperature change is much greater than for the picture of temperature change shown by the instrumental data. But different reconstructions of temperature change over a longer period, produced by different researchers using different methods, show essentially the same picture of highly unusual warmth across the NH during the 20th century. The principal conclusion from these studies (summarized in IPCC AR4) is that the second half of the 20th century was very likely (90% probable) warmer than any other 50-year period in the last 500 years and likely (66% probable) the warmest in the past 1300 years.

Phil Jones comments further: “One of the three temperature reconstructions was based entirely on a particular set of tree-ring data that shows a strong correlation with temperature from the 19th century through to the mid-20th century, but does not show a realistic trend of temperature after 1960. This is well known and is called the ‘decline’ or ‘divergence’. The use of the term ‘hiding the decline’ was in an email written in haste. CRU has not sought to hide the decline. Indeed, CRU has published a number of articles that both illustrate, and discuss the implications of, this recent tree-ring decline, including the article that is listed in the legend of the WMO Statement figure. It is because of this trend in these tree-ring data that we know does not represent temperature change that I only show this series up to 1960 in the WMO Statement.”

The ‘decline’ in this set of tree-ring data should not be taken to mean that there is any problem with the instrumental temperature data. As for the tree-ring decline, various manifestations of this phenomenon have been discussed by numerous authors, and its implications are clearly signposted in Chapter 6 of the IPCC AR4 report.

Included here is a copy of the figure used in the WMO statement, together with an alternative version where the climate reconstructions and the instrumental temperatures are shown separately. 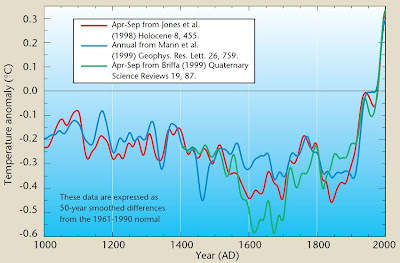 «Although water vapour is a strong greenhouse gas, its concentration in the atmosphere changes in response to changes in surface climate and this must be treated as a feedback effect and not as a radiative forcing» TS pág. 23 AR4


Citando Monbiot no texto referido por si:
«The greatest tragedy here is that despite many years of outright fabrication, fraud and deceit on the part of the climate change denial industry, documented in James Hoggan and Richard Littlemore's brilliant new book Climate Cover-up, it is now the climate scientists who look bad. By comparison to his opponents, Phil Jones is pure as the driven snow. Hoggan and Littlemore have shown how fossil fuel industries have employed "experts" to lie, cheat and manipulate on their behalf. The revelations in their book (as well as in Heat and in Ross Gelbspan's book The Heat Is On) are 100 times graver than anything contained in these emails.»

«Although water vapour is a strong greenhouse gas, its concentration in the atmosphere changes in response to changes in surface climate and this must be treated as a feedback effect and not as a radiative forcing» TS pág. 23 AR4"

The online publication of sensitive e-mails and documents from a British climate centre is brewing into one of the scientific controversies of the year, causing dismay among affected institutes and individuals. The tone and content of some of the disclosed correspondence are raising concerns that the leak is damaging the credibility of climate science on the eve of the United Nations climate summit in Copenhagen in December.

The Climatic Research Unit (CRU) at the University of East Anglia (UEA) in Norwich confirmed on 20 November that it had had more than 1,000 e-mails and documents taken from its servers, but it has not yet confirmed how much of the published material is genuine. "This information has been obtained and published without our permission," says Simon Dunford, a spokesman for the UEA, adding that the university will undertake an investigation and has already involved the police.

Many scientists contacted by Nature doubt that the leak will have a lasting impact, but climate-sceptic bloggers and mainstream media have been poring over the posted material and discussing its contents. Most consist of routine e-mail exchanges between researchers. But one e-mail in particular, sent by CRU director Phil Jones, has received attention for its use of the word "trick" in a discussion about the presentation of climate data. In a statement, Jones confirmed that the e-mail was genuine and said: "The word 'trick' was used here colloquially as in a clever thing to do. It is ludicrous to suggest that it refers to anything untoward."

"If anyone thinks there's a hint of tweaking the data for non-scientific purposes, they are free to produce an analysis showing that Earth isn't warming," adds Michael Oppenheimer, a climate scientist and policy researcher at Princeton University in New Jersey. "In fact, they have been free to do so for decades and haven't been able to."

"There are apparently lots of people who really do think that global warming is an evil socialist plot, and that many scientists are part of the plot and deliberately faking their science," adds Tom Wigley, a senior scientist at the National Center for Atmospheric Research in Boulder, Colorado, and former director of CRU.

The title of the uploaded file containing the leaked e-mails — 'FOIA.zip' — has led to speculation that the affair may be linked to the deluge of requests for raw climate data that have recently been made under the UK Freedom of Information Act to Jones (see Nature 460, 787; 2009). The source of many of those requests is Steve McIntyre, the editor of Climate Audit, a blog that investigates the statistical methods used in climate science. "I don't have any information on who was responsible," McIntyre told Nature.

Nevertheless, e-mails allegedly sent by Jones seem to illustrate his reluctance to comply with these requests. "All scientists have the right to request your data and to try to falsify your results," says Hans von Storch, director of the Institute for Coastal Research in Geesthacht, Germany. "I very much respect Jones as a scientist, but he should be aware that his behaviour is beginning to damage our discipline." In a statement, the UEA said: "The raw climate data which has been requested belongs to meteorological services around the globe and restrictions are in place which means that we are not in a position to release them. We are asking each service for their consent for their data to be published in future."

However, von Storch believes that, at least until the affair is resolved, Jones should cease reviewing climate science for the Intergovernmental Panel on Climate Change.